WHEN IS THE BEST TIME

TO APPLY UNDER-BODY GEL
TO YOUR CAR TO COMBAT
CORROSION´ YESTERDAY!

Opening scene: a beautiful summer ‘s day, car wash paraphernalia laying all around: garden  hose, sudsy bucket , and sponges. Taking a step back, you pause to admire your handiwork. Sitting there, gleaming on the still-wet asphalt, is your car, looking as clean and shiny as the day you brought it home. The long cruel winter is forgotten, the days when your car was covered in chalky salt residue and the wheel wells hanging with frozen brown slush a fading memory. The only problem is that your pride and joy, your most expensive purchase after your home, is rusting from the inside out. True, there are no more salt trucks on the highway, but acidic brine is continuing to eat away at body panels, mechanical components, and electronics. Indeed, even your car’s carpets and upholstery are not safe. Highway departments have been heavily salting roads since the 1960s in an effort to allow us to maintain our mobility in the face of Canada’s brutal winters . Over the last few years, rock salt (sodium chloride) has been replaced by the far more corrosive organic liquid deicing. By “organic liquid deicing,“ provincial governments mean a brine solution that`s a combination of 11 various road salts dissolved in water and beet juice. The very benefits that make brine effective, the ability to melt snow on contact and to stick to the road, are wreaking havoc on the structural and mechanical integrity of today’s vehicles. Mechanics across North America report a significant increase in vehicle corrosion, the rapid rusting of brake lines and suspension components on nearly new cars. The popularity of organic brine as a deicer has developed hand-in-hand with the need for cost savings and the privatization of highway maintenance. Organic brine is more expensive at 29 cents a litre, compared to five cents for salt brine. However, there is a two dollar-per-

lane kilometer savings, since brine can be 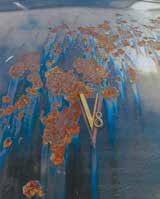 spread on dry roads and will remain effective at lower temperatures, cutting down on the need for lines of

plows and salters waiting for the snow to fall. A highway department or contractor saves on operational costs and overtime hours. The liquid brine solution spread on our roads can contain a mixture of dissolved rock salt, magnesium chloride and beet juice. Magnesium chloride, extracted from sea water, is added to the mix to lower the freeze point temperature of the brine. Magnesium chloride dissolves at 32 percent relative humidity, independent of temperature, meaning roads stay wet, preventing the formation of ice down to – ‘18 C, compared to rock salt at -7 C. Beet juice is added and has become a popular snow and ice fighting tool. It is organic, reduces corrosion, melts to very low temperatures and reduces the amount of material needed for application. A byproduct of sugar beet processing , the sugar in the solution lowers the freezing point of the ice to approximately -25 C. In addition, the beet juice, which is essentially molasses, makes the brine solution sticky, keeping it on the road where it is sprayed. It is claimed that organic liquid deicing is better for the environment, as it cuts down on the use of rock salt by 30%. However, environmental studies have shown actual road salt usage has slightly increased. In addition, the sugars in beet juice can reduce the oxygen content in waterways, harming fish. Whatever the environmental impact, the effect on cars is insidious…. a better means of destroying your vehicle could not have been invented if it were done on purpose by a mad scientist. Winter driving means the organic brine is constantly coating your car, and, as a liquid, easily works its way into areas that rock salt would never penetrate. The brine gets behind trim and weather stripping, in body seams and sub-frames, and, thanks to addition of beet juice, sticks fast. In dry conditions the brine will turn

into fine particles, kicked up by traffic. The dust will permeate even further into your car, causing rust and acidic corrosion on radiators, air conditioning condensers, wiring, and sensitive electronic components. The use of magnesium chloride in brine means that the corrosion is occurring year-round due to normal humidity, re-wetting the brine dust that is now in every spot in your car. If you store your car in a garage or underground parking during the winter, the slightly warmer temperatures will allow the brine to remain wet, promoting corrosion. Most unfairly, the act of washing your car in the summer can help reactivate the brine dust even if magnesium chloride is not used, turning the calcium chloride and beet juice back into an acidic slurry. Add it all up, and the high cost of bodywork and paint can make a rusty late model vehicle virtually worthless. The good news is that the opposite is true. A well-cared-for, rust-free vehicle, no matter what the age, is always in demand and will retain a value in excess of its contemporaries. Apart from keeping your car parked in your living room, there is only one way to protect against the year-round corrosive effects of salt brine: have your vehicle oil sprayed by a reputable rust proofing company on an annual basis. Of course, it’s still a good idea to keep your car clean; washing off the salt brine regularly will help limit its corrosive effects on the exterior. A regular wax job, admittedly difficult in winter, will provide some degree of protection to your paint. What is really needed is a layer of protection between your vehicles and the organic brine. The application of a light oil that will coat all interior panels and creep into welded seams, combined with Rust Checks ‘s unique under-body gel, provides a proven barrier to salt brine. The best time to get your car oil sprayed is right now! Whatever the outside temperature, the oil can go to work displacing the wet brine residue that is hiding in the nooks and crevices of your just-washed car.